By: Andrew Heiserman and Jennifer Simmons - Updated: 1 month ago

ROCHELLE – The Rochelle elementary and high school districts, as well as the local community, held a drive-by parade Tuesday evening for a husband and wife who were very influential in both the community and local schools.
The parade was dedicated to saying farewell to Dr. Joe Thiele and his wife, Norma, as they move to Texas to be closer to their daughter and her family. The parade began at 5:45 p.m. on 10th Avenue by St. Paul Church. The parade went west to 20th Street, north on 20th Street to Carrie Avenue and east on Carrie Avenue before finishing on Sunset Terrace near the Thieles’ home where the couple was treated to a horse-drawn carriage ride from friend Jim Cargill of Cargill Carriage Rides of Franklin Grove.
Joe worked in the educational field his entire career, starting as a teacher and working his way up to superintendent of the Rochelle Elementary School District. During his time as superintendent, he was influential in many decisions, such as consolidating the district transportation systems, and he always made sure to handle himself professionally.
“Being a superintendent of a district can be very stressful at times and Joe always kept his demeanor,” retired Central School Principal Neil Swanson said. “No matter the situation he was always very professional, respectful and I never saw him lose his temper. I have nothing but the utmost respect for Joe.” 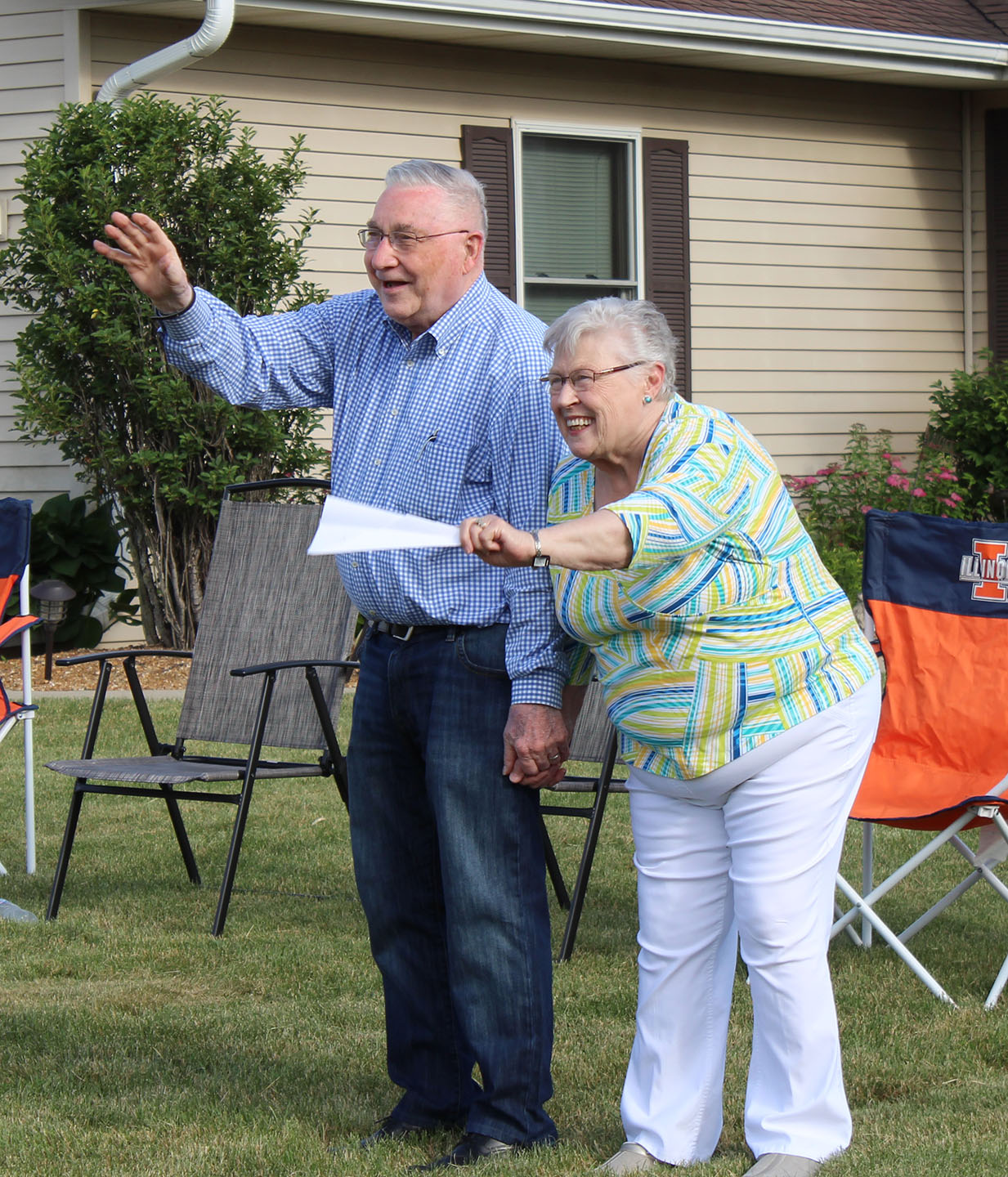 Joe was also known to always look for the positive in any situation, even if he was meeting with a student or teacher about something that was done wrong or needed to change. Joe also made it a point to remember the names and faces of not only the teachers and principals in the building, but many of the students and their families too.
“He would always recognize a former student, a former parent, somebody he was involved with in the educational field or even somebody in his personal life,” Swanson said. “He would always stop and talk to them asking them how their kid or significant other is. He seemed to always have a great memory of the people he was involved with and I thought that was very impressive.”
Throughout his career as superintendent, Joe’s wife, Norma, worked as the librarian at Tilton School and would attend every meeting and conference with him. After his retirement, Joe was a member of many different organizations and committees in town including the Rochelle Planning and Zoning Committee which he served for 25 years and the Rochelle Lions Club.
Joe was also influential in the construction of the new Lincoln School. Whether it is in the community or in the school districts, Joe and Norma will long be remembered.
“As I got into the superintendent position, I was very conscious of the legacy that Joe had left,” retired Superintendent Todd Prusator said. “Joe had a legacy of being ethical, fair and kid centered, always doing what was best the students.”
Joe and Norma will be making their home in Wylie, Texas, after calling Rochelle their home for 62 years.
The couple moved to Rochelle in 1958 and raised their family here — a daughter, Debbie, and a son, Mark.
Mark was on hand from Pennsylvania, as were Debbie and her husband, Craig, and their daughter, Megan, for Tuesday’s send-off.
Debbie and Craig Sweet, and daughter Megan – along with her family – live in Wylie and are looking forward to having Joe and Norma close by.

End of the line