By: Russell Hodges - Updated: 9 months ago

There weren’t any Rochelle Township High School student-athletes competing in the IHSA State Football Championships this past weekend, but one Lady Hub found a fun and inspiring way to contribute to the festivities at Northern Illinois University’s Huskie Stadium.

While most fans had their eyes on the gridiron, others may have seen something on the sidelines, dancing and cheering along as teams from all around the state battled for championships. Rochelle freshman Anna Harvey was that something, trading in her usual purple and white for an orange and blue costume so she could represent the IHSA as the association’s sportsmanship mascot, Add-A-Tude.

Anna, the daughter of RTHS athletic director Richard Harvey, said the idea to volunteer as the IHSA mascot stemmed from a joke the two made about having a mascot at the high school.

“My dad and I always joked about how I would be the mascot at Rochelle if we had one,” Anna said. “The IHSA reached out to all of the athletic directors, and my dad asked me if I was interested in being the mascot. There was a certain height for the costume, but I barely made the cut… I was in that costume for over seven hours, but it was a lot of fun.”

Harvey was on the field for over half of the Friday football games, sharing pictures with IHSA officials and spirit squads from several high schools competing in the championships. At RTHS, Harvey has been actively working to promote sportsmanship and school spirit, coordinating recent events like the Hub Superfan Costume Raffle during Rochelle’s regional championship volleyball match against Belvidere North earlier this school year. 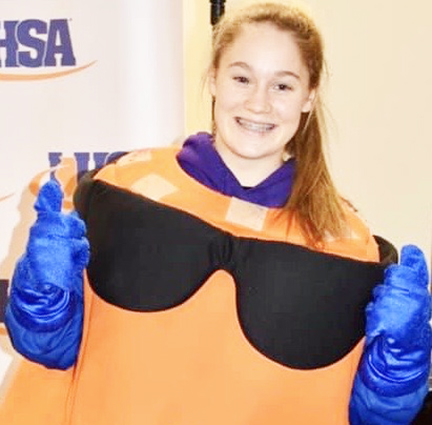 “I know that I like when people cheer me on,” Harvey said. “I try and put myself in the player’s shoes and I try and treat others the way I want to be treated. It’s also really fun to bring people together that want to spread school spirit.”

Add-A-Tude has been the IHSA mascot since 1997, when the mascot was created in an effort to promote good sportsmanship across all athletics. Add-A-Tude, whose costume includes a large “A” for the body as well as black sunglasses, shoes and a hat, appears at state tournaments and high school sporting events throughout the school year. Through public service announcements and merchandise, Add-A-Tude makes an impact at both the IHSA and IESA levels.

Harvey has been volunteering her time to spread positivity since middle school. As an eighth-grader, she and members of Girl Scout Troop 3217 painted the walls on the inside of the girls bathrooms at Rochelle Middle School with inspiring messages and pictures aimed at promoting self-confidence and eliminating negative social stigmas.

Her time as Add-A-Tude may be over for now, but Harvey said she would happily be the mascot again in the future. Fans attending Rochelle sporting events can certainly expect to see more fandom from Harvey and her peers as the school year progresses.

“I feel like people can be so self-centered at times,” Harvey said. “It doesn’t hurt to go out and watch a football game or a volleyball game because you’re being supportive and you aren’t dragging other people down… I told my dad that I’d definitely be the mascot again. It was fun and people were cheering for me and saying things like, ‘go Add-A-Tude!’”