BELVIDERE — Billie Catherine O’Malley, 78, Belvidere, Ill, passed away suddenly, but peacefully, at home with her husband at her side, on Wednesday, May 13, 2020.

She was born on March 16, 1942, to William Duncan and Jacqueline (Kilfoil) Duncan Ballard in Mason City, Iowa. Because her dad was deployed in World War II, he didn’t see her until she was 3 years old. When she was baptized, the priest wanted to baptize her “William” as there is no Saint Billie; however, they all agreed to baptize her “Catherine.”

As a young girl her family moved around to various small towns in Iowa, but she always considered Mason City and Clear Lake, Iowa, her home. Billie adored horses, owned three while growing up, and rode like a pro at the age of 75 on a ride in Estes Park, Colo.

While in middle school her family moved once again, this time to Rochelle, which ended up being her home for more than 30 years. She made many lifelong friends in Rochelle and met her future husband, Neil. While in high school, Billie became a student of RTHS art teacher Franklin Kruger who encouraged and promoted her talent. One year, she painted the downtown Christmas decorations for the City of Rochelle. Most of her art is hanging in her families’ homes. 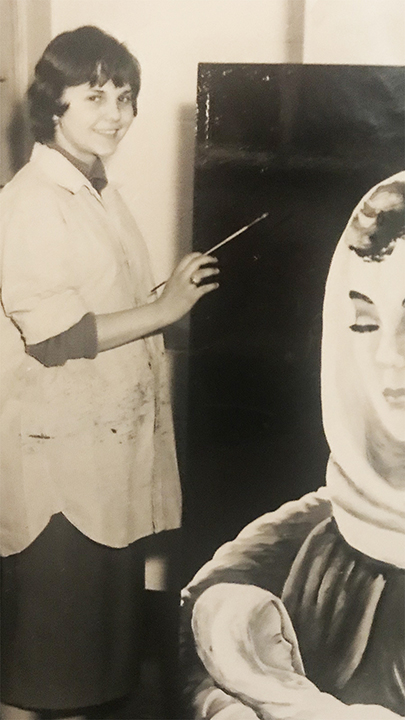 She worked at the Hub Theater in the late 1950s with her best friend, Sherri Swanson, where she took tickets, made popcorn and wrangled the youngsters in the theater.
It was through her art and the newspaper that she caught the eye of a young Navy seaman named Cornelius Evans “Neil” O’Malley. While on ship, he would get his copies of the Rochelle News and Rochelle Leader and saw this gal whose photos ran in the newspaper with her art. He thought she was “kind of cute.” Seeing as Rochelle is a small town, and once discharged from the Navy, their paths crossed through mutual friends, mainly his brother Bud, and they had their “first official” date on Mom’s 18th birthday. Although, there’s a story about him chasing her around a dining room table for a New Year’s Eve kiss prior to that, but it’s not confirmed.

They were married at the old St. Patrick Catholic Church in Rochelle on Feb. 17, 1962. There was a blizzard that day and night, so instead of starting out on their honeymoon, they spent it, although somewhat against their will, with friends who crashed their apartment. Unbeknownst to the newlyweds, brother Bud had made an extra key and Neil later joked, “Never trust your brother.”

They settled in Rochelle and their first daughter was born in January of 1963, followed by four more daughters over the course of the next 10 years. There were many vacations in the pop-up camper as well as family gatherings, which included close friends who always were considered family.

Their Catholic faith was extremely important to them and they lived it daily, such a wonderful example for their five daughters. Billie taught and led hundreds of adults into the Catholic Church, starting with instructing the RCIA program at St. Patrick and carrying that through to her time at St. James Church in Belvidere. Neil ended up being a sponsor each year for at least one of her students. She also trained all the alter servers for Saint James.

When the new St. Patrick Church was built in Rochelle, she worked closely with the artist and learned about each precious and sacred piece in the church, its Biblical meaning and inspiration. Billie also organized a Seder Supper at the church each year and was in charge of decorations for the annual church bazaar.

Their house was the “get together” place for church gatherings; family holidays; doughnuts after Mass; going-away parties, particularly when Swift and Del Monte moved out of town; birthday parties; and all their daughters’ friends, who would comment, “Your house always smells like fresh-baked cookies.” She always treated the girls’ friends with respect and love.

She made entertaining look easy, never stressed about a gathering no matter how many people were coming. Her girls remember their dad handing her a 7-7 cocktail while she would be making her fantastic gravy, mashing the potatoes, baking the rolls and “directing buffet traffic.”

Billie encouraged her daughters to be creative. They had their own play and craft room, and the walls were covered their “art.” Glue, glitter, crayons and construction paper were staples on the playroom floor and table, which is now a restored coffee table.

She was a Camp Fire Girls leader for all five of her girls and their friends, and was president of the local chapter.

She was an accomplished, self-taught seamstress who made multiple outfits, church banners, curtains and her girls’ prom dresses.

We’re not exactly sure what kind of music Mom liked because she danced and sang to anything and everything. It was so embarrassing for her teen daughters as she’d break out singing and dancing in front of their friends, usually in the kitchen, to rock-n-roll or pop music. While she was a stay-at-home mom, she regularly won prizes on WRHL Radio, calling in with her correct answers.

Whenever Neil got home from work, she always dropped what she was doing to greet him with a kiss and a hug.

She also canned vegetables from their garden that Dad planted, made jams and jellies and everything was homemade. Her pies were beautiful and delicious. Her other pastimes were reading and watching movies, many times while Neil was out putting hundreds of miles on his bicycle each year. They were members of the Blackhawk Bicycle Club.

Everyone she met adored her quickly, and she truly loved everyone unconditionally and without judgment. She was a really good listener, never interrupting. Anyone who knew her would say they were a better person having known her. Billie’s smile was like sunshine, it glowed and warmed everyone’s heart. You couldn’t help but smile back.

About three years ago, Billie was diagnosed with Alzheimer’s disease. Dad did such a great job of taking care of his lovely bride. We were so blessed that she was her typical happy self, still selfless and wanting to help others. She regularly went to LifeScape and Anam Memory Care in Rockford where she’d break out in dance when the music was on. They loved her there as much as we did.

She was preceded in death by her youngest daughter, Jane Anne O’Malley Loos, on March 2, 2016; her mother, Jacqueline Ballard; and her biological father, William Duncan.

Services and interment will be private. A memorial service will be held at a later date. The family will be praying the rosary at 3:30 P.M. on Sunday, May 17, 2020. Live streaming details are pending, please go to www.belviderefh.comfor details.  Memorials can be made to St. James Catholic Church in Belvidere, Ill, Knights of Columbus Council #735, or Lifescape Adult Daycare, Rockford, Ill.