By: Jennifer Simmons - Updated: 3 weeks ago

CRESTON — Firefighters from Rochelle and Ogle-Lee Fire Departments worked to extinguish a fire inside a building in the 100 block of Main Street in Creston Monday morning.
The building, located on the property of Hueber Feed LLC in Creston, was showing heavy smoke and flames upon firefighters’ arrival.
According to Rochelle Fire Chief Dave Sawlsville the fire appears to have started in a break room area of the building. 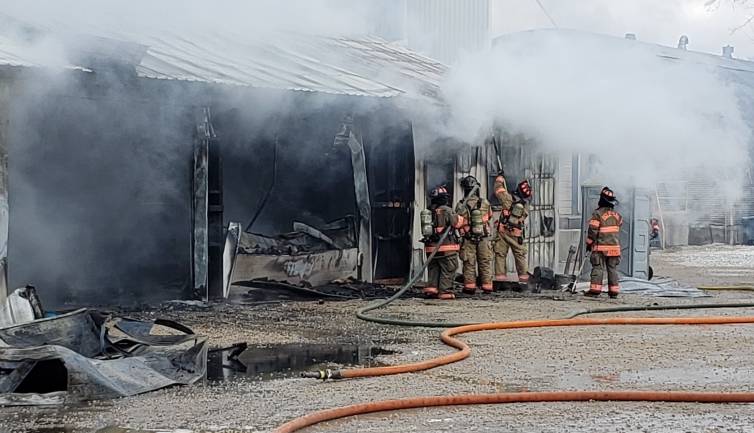 “At this time the cause of the fire appears to be electrical in nature,” Sawlsville said. “…on the far east end [of the building they] insulated it, heated it…there was a refrigerator, a sink, a microwave, a coffee maker… It was a nice breakroom for the truck drivers.”
There was no gas hook-up to the building, meaning all heating was also electrical.
“An employee of Hueber Feed had been in the breakroom and saw a small fire in the southeast corner which he sprayed with a fire extinguisher,” Sawlsville said. “He then put the extinguisher down and took off and removed a tractor from the garage area of the building.”
Other equipment in the building was not able to be salvaged.
Sawlsville said the building is a complete loss at a cost estimate of approximately $80,000.
Crews were called to the scene at approximately 11:30 a.m.