Senior Yuelma Ortiz dominated the varsity race for the Lady Hubs, surging ahead during the first mile and cruising to victory with a time of 21:40.9. Ortiz finished nearly one-and-a-half minutes ahead of the second-place runner, Akemi McHan of DeKalb, who clocked in at 22:59.3.

“I was a little nervous at the start of the race, but I was really happy when I finished the race,” Ortiz said. “I remember running this race during my freshman year and it’s my senior year now so I really wanted to win this. I thought I ran the hills a lot better than I did last season." 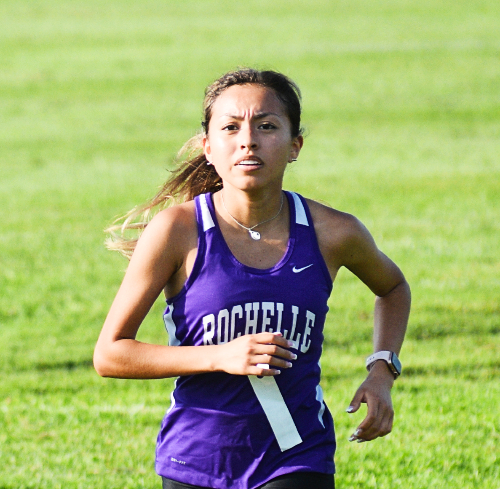 "We’ve been working on running up hills during practice and I feel a lot stronger," Ortiz said. "This win makes me feel more confident going into our next few meets and I thought I ran a pretty good time today.”

Junior Luis Hernandez was the second Rochelle runner to emerge victorious on Thursday, winning the varsity race for the Hubs with a time of 17:31.0. Hernandez trailed DeKalb’s Eduardo Castro over the first mile of the course, but a strong effort over the latter half of the race allowed the junior harrier to overtake Castro and cruise to a 44-second victory.

“I was staying calm during the beginning of the race and I saw him starting to fade as the race went on,” Hernandez said. “I was able to take off from there. I’ve been motivating myself this season and I think about how my last few seasons didn’t go so well. I’m working to qualify for the sectional meet this season and this win is going to motivate me to achieve that goal.”

Senior Thomas Koziol and freshman Declan McGee took seventh and ninth with respective times of 19:07.3 and 19:25.3. Sophomore Chris Hickey placed 17th with a time of 20:30.7 for the Hubs, who finished second out of five qualifying teams with 61 points in the varsity race. Rochelle will compete in the Larry Eddington Invitational at Kaneland High School on Saturday.