Display fit for a king

By: Doug Oleson - Updated: 10 months ago

Mural completed and installed near downtown

ROCHELLE — It was hard to tell who was more excited Saturday morning– Alva Valle or Carolyn Smith.
Valle, an 18-year old Rochelle Township High School senior, was one of two dozen people who watched the mural she painted of Elvis Presley being installed on the brick wall of Ray’s Merchandise, which is co-owned by Carolyn and Ray Smith.
“I feel it’s a big honor,” Alva said of her first mural. “I never thought I’d put something up, done by me, that people can see.”
“It’s something I never imagined,” her mother, Elvia Valle, added. 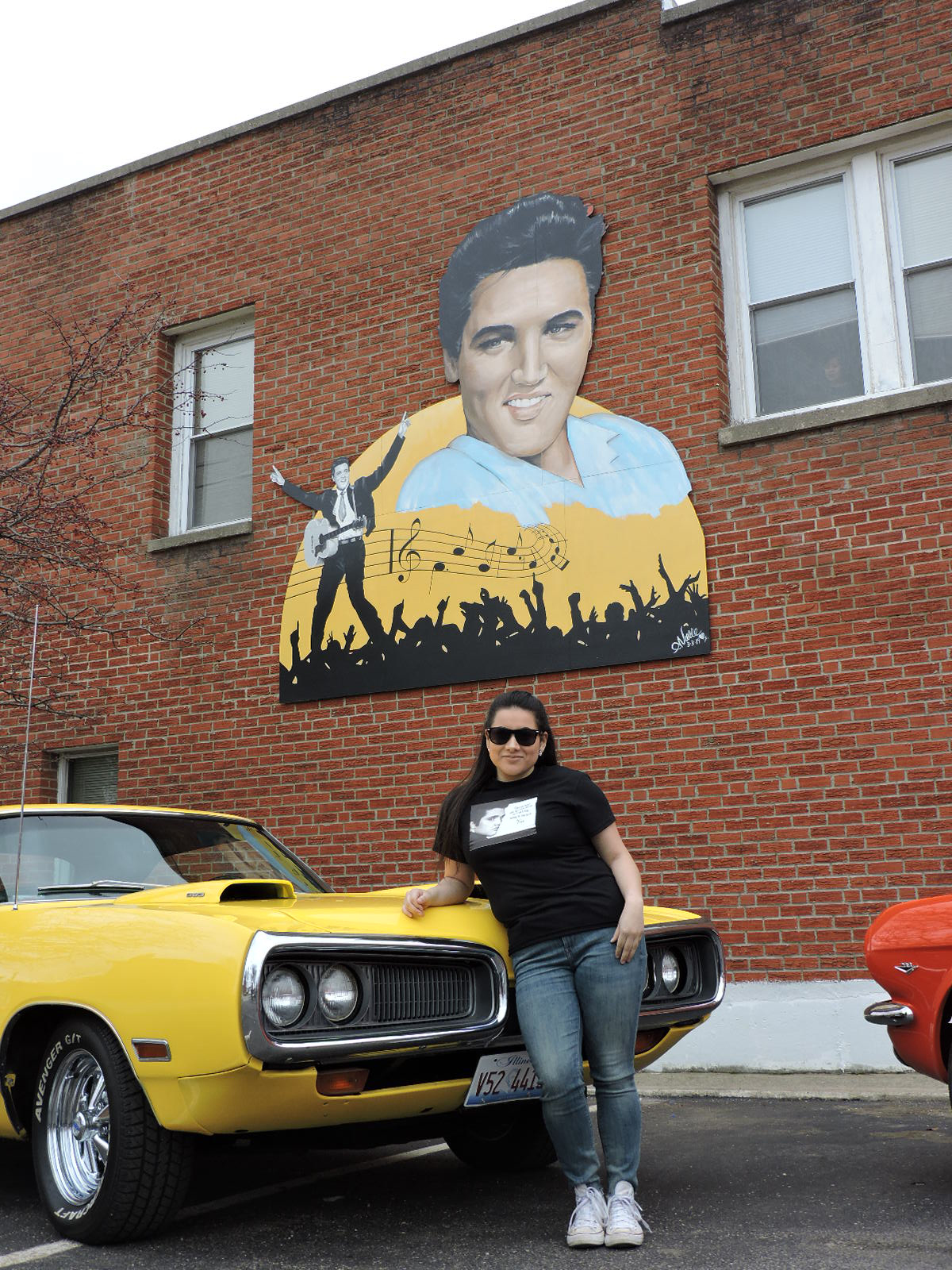 Carolyn, a huge Elvis fan, said she jumped at the chance to donate the wall – located at 316 North 6th St., - when local artist Fran Volz asked.
“Ray wasn’t crazy about Elvis,” she said jokingly of her husband of fifty years. “But now he is.”
“Whatever she wants,” Ray said good naturedly about the mural.
“I think it’s a fair place to put it,” Alva said, adding that she and Carolyn’s granddaughter, Amber Boehm, are best friends and thinks of her as family.
Carolyn said she actually saw Elvis perform in Memphis, Tennessee, in 1954. Because she was just seven years old at the time, she doesn’t remember much about the concert except that there were “a lot of girls screaming.” Ray said Carolyn’s sister-in-law saw The King of Rock and Roll several years later in Las Vegas, and said he put on a great show.
The idea for the mural came from Volz as a way to enhance the arts.
“I thought it would be cool to have a movie star walk in our downtown,” he said in a press release.
Volz then contacted middle school art teacher Bob Donovan, who reached out to three of his former art students, one of whom was Alva, who immediately accepted the offer. Ironically, Alva said she didn’t know who the mural was going to be until she started working on it.
It took seven months to complete the mural, which consists of five differently shaped panels. In many ways, it was a challenging project for her. Unlike all her other paintings, she had to stand, rather than sit down. Painting the 11-foot mural on the wall in Volz’ downtown art gallery, the four-foot, 11-inch teen sometimes had to do a balancing act so she wouldn’t fall.
“I had to stand on a scaffold and use big brushes,” she said. “It was a pain sometimes, but it was worth it.”
Overall, the mural came out just the way she was hoping it would. “I’m very excited about it,” she said.
According to her mother, Alva started art in middle school, but wasn’t that into it at first. Over time, though, her interest “just developed” to the point she plans to attend Northern Illinois University this fall to study art education.
“She loves painting faces,” Elvia said, adding that Alva has done so many portraits, she has asked her to paint something else.
Alva was assisted in the Elvis mural by 2018 RTHS graduate Cecilia Schmitt, a freshman at Kishwaukee College, who touched up a few things when Alva wasn’t available. “It’s awesome,” Cecilia said of the finished work. 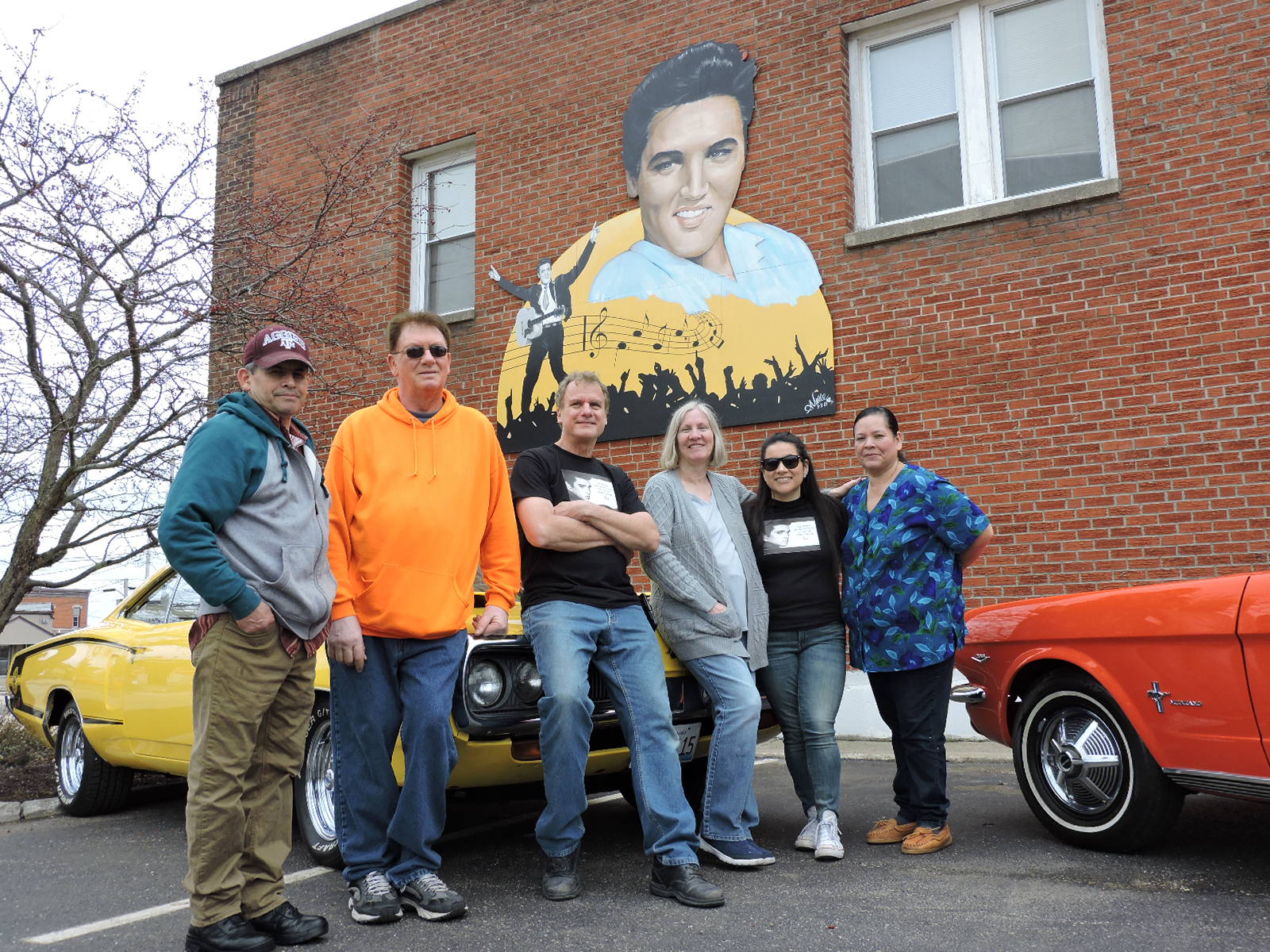 Besides Cecilia, three of Alva’s high school classmates volunteered to put up the Elvis mural, including Josh Harmon, Leo Hernandez and Sergio Guevara. To put everyone in the mood, Carolyn played vintage Elvis music while handing out peanut butter and banana sandwiches, one of Elvis’ favorite foods.
Now that the mural is up, Carolyn said she might hold a special Elvis night during the summer. “We’re right next to the city parking lot,” she said.
The mural includes a large Elvis face – circa early 1960s – at the top and, in the lower left hand corner, a 1950s Elvis performing with a group of fans at the bottom.
Alva originally wanted to just do Elvis’ face, but Volz suggested they add the figure of Elvis performing. Alva said Volz added the final touches to the mural.
Elvis is the second mural to grace the downtown area. The first is of Marilyn Monroe on Cherry Avenue. A third, which Cecilia has finished, is of John Wayne.
“We haven’t decided where to put it yet,” she said.

Alliance Francaise is like visiting Paris without leaving the state