By: Russell Hodges - Updated: 1 week ago

ROCHELLE — The Rochelle Junior Tackle teams won all four matchups against Dixon on Saturday. The fifth, sixth and seventh-graders remained unbeaten on the season, while the eighth-graders recorded their third win. Rochelle will face Byron on the road next Saturday.

Trailing 6-0 in the first quarter, Rochelle bounced back when Brode Metzger broke loose off the left side for a 16-yard touchdown run. After recovering a fumble on defense, Rochelle took the lead after Metzger’s 32-yard rush and Gavin Neale’s 21-yard touchdown rush in the second quarter. Neale added a 32-yard touchdown run in the third quarter to extend the lead.

The Junior Hubs led 22-6 late in the third quarter, when Metzger stepped up with a sack on defense and Neale scored his third touchdown of the afternoon on a 23-yard run. With Rochelle leading 28-6 in the fourth quarter, Van Gerber connected with Reece Harris on a 33-yard pass that set up a 9-yard rushing touchdown from Keagan Albers. Rochelle won by a final score of 35-6, with Metzger rushing for 84 yards while Neale finished with 83 rushing yards. 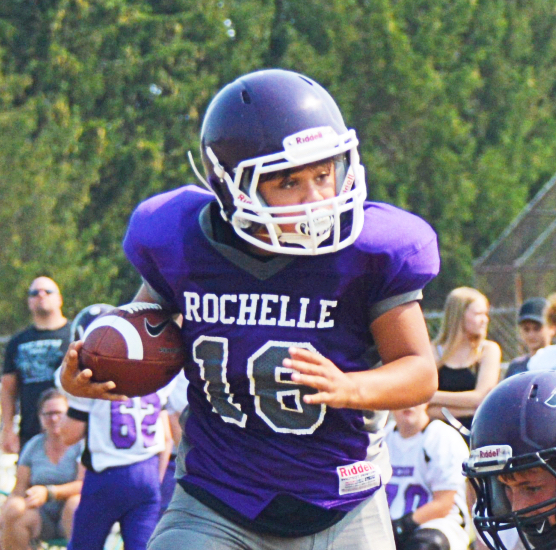 Angel Hernandez ignited the Rochelle offense in the first quarter, rushing for a 48-yard touchdown to give the Junior Hubs the early lead. Dylan Manning intercepted a Dixon pass later in the quarter, returning the ball 67 yards for a defensive touchdown to extend the lead. Manning added to Rochelle’s advantage with a 22-yard touchdown run in the second quarter.

The Junior Hubs sealed the win with a 34-yard rushing touchdown from Hernandez during the third quarter. Despite Dixon scoring a fourth-quarter touchdown, Rochelle won by a final score of 28-6. Manning rushed for a team-high 92 yards in the win, while Hernandez finished with 82 rushing yards. Adam Cobos and Keegan Cathina led the defense with four tackles each. 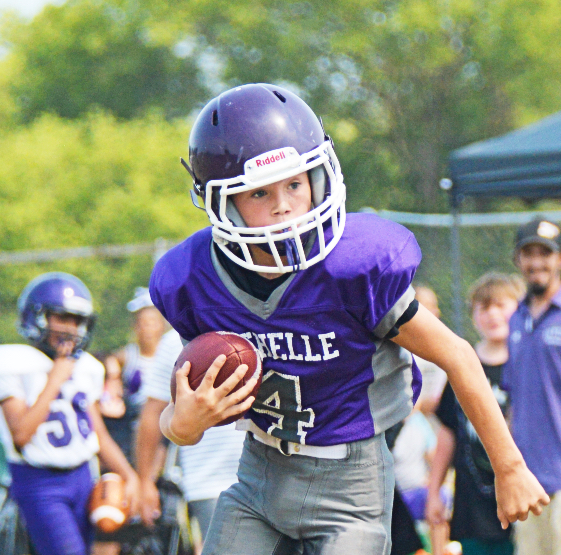 Luke Chadwick rushed for a 13-yard gain early in the first quarter to light the spark for the Rochelle offense. Zachary Johnson forced a turnover later in the first quarter, intercepting a Dixon pass and returning the ball 11 yards. After Cohen Haedt rushed for 12 yards, Chadwick found the end zone from 1 yard out for the first and only Junior Hub touchdown of the game.

Andrew Eyster forced a second Dixon turnover in the second quarter, recovering a fumble to give the ball back to the Junior Hubs. Haedt rushed for a 33-yard gain off the right side before finding Chadwick for a 26-yard pass play during the third quarter. Rochelle held off Dixon by a final score of 8-6, with Chadwick totaling a team-high six tackles for the Junior Hub defense. 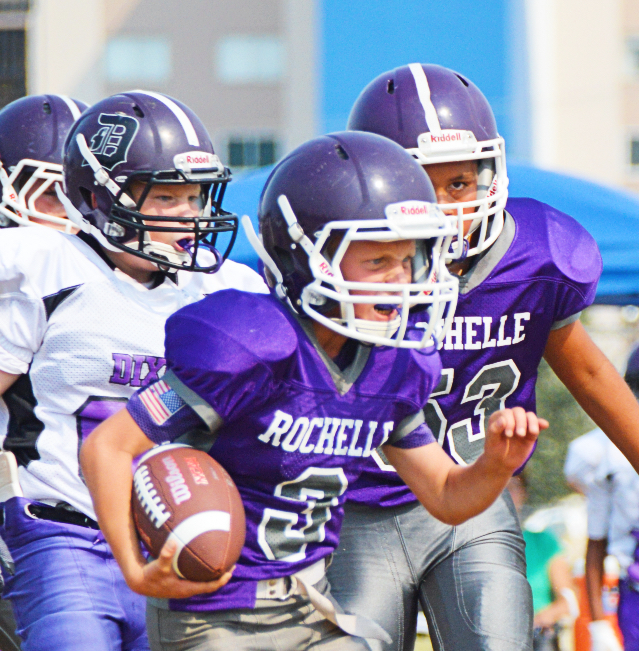 Braxton Bruns scored Rochelle’s first touchdown of the afternoon, sprinting down the field for a 47-yard score with the Junior Hubs trailing 6-0. Bruns added a second touchdown run in the second quarter, finding the end zone from 20 yards away to extend the Rochelle lead. With the Junior Hubs ahead 16-6, Bruns rushed for 41 yards down the left sideline to set up a 1-yard touchdown pass from Riley Smith to Vinny Tornabene late in the second quarter.

Mason Lopez recovered a fumble for the Junior Hubs during the third quarter, setting up a 31-yard rush from Bruns and a 15-yard touchdown rush from Mikey Chadwick. Leading 32-20 in the fourth quarter, Bruns ran for 27 yards and Chadwick carried the ball for 19 yards before Nolan Zick cashed in the drive with a 6-yard rushing touchdown. Rochelle won by a final score of 40-28, with Bruns recording a team-high 153 rushing yards as well as 10.5 tackles on defense.