Pushing past the limits

By: Lori Hammelman - Updated: 3 years ago

Somewhere in the sea of the thousands of runners in this year’s Chicago Marathon were two of Rochelle’s very own – Mandy Hale and John Whitaker.

Even though the goal to cross the finish line is the same, both have two different stories of how they prepared as well as what kept them motivated throughout the long run.

This was the third 26.2-mile marathon for Hale, having also completed a half marathon along with three triathlons and a number of 5K and 10K events. For this marathon, she ran as part of Team Kidney, who helped to raise money for the National Kidney Foundation of Illinois.

Hale uses an 18-week training plan that has her running four days a week and sticks to a regimen even if she is not preparing for a marathon.

“Whether I’m training for a run or not, I always map out my running plan for the month in advance. I consider it an appointment with myself,” Hale said. “Whether I want to or not, I show up. Once in a while, I ‘reschedule’ a run to another day, but I don’t skip them.”

Many runners have told their stories of run day rituals — Hale always pins the race bib to her shirt the night before and always arrives on race day early. She also watches a motivational video before heading out.

Hale was also ready in case she hit the “marathon wall,” which is the point in the marathon when a runner’s glycogen (stored energy) within the muscles is depleted. This fatigue can force a runner to slow down considerably.

“I have hit the wall previously at mile 19 in marathons. When that happens for me I begin to doubt myself and just feel lousy, both physically and mentally,” Hale said. “This time I had a playlist of motivational songs ready for mile 19. I was prepared and for the first time I never hit a wall.”

Hale explained although her daily diet is typically low carbs, low dairy and low fat, she allowed herself a ‘cheat day’ and enjoyed some authentic Chicago-style pizza the night before.

As a way to mentally prepare before and stay motivated throughout the entire marathon, Hale developed a simple and effective strategy.

“I actually did something new this time. I dedicated each of the 26.2 miles to someone or a group of someone’s that are important to me. I let each person know which mile I was dedicating to them and when I ran that mile I though of that person and prayed for them,” she said. “I actually found myself laughing out loud or even in tears as I ran and thought through these memories!”

Throughout the marathon, Hale said she took in the spectacular sites of Chicago and remarked how encouraging the spectators were.

“The spectators had some really great signs and the energy was contagious, especially near the end,” she said. “My boyfriend, Jeff Tilton, was there cheering me on. He met me at miles 4, 12, 20 and 25 and was super encouraging as he would cheer me on, take some pictures and help me with things like adjusting my fanny pack that wouldn’t stay on tight!”

Hale said the energy continued after the race as she excitedly shared details to family members. Not surprisingly, she was fast asleep about 15 minutes into the car ride home.

“My sister, Lydia Stover, had a surprise party waiting for me when I returned home after the run. I walked into my house decorated with signs and balloons and all of my favorite foods and people. She had my kids, mom, niece and close friends all surprise me to celebrate!” Hale said. “I didn’t feel too sore that day. The next day my knees, quads and feet felt a little rough. Stairs were pretty tough!”

Hale talked about the rewards in running for a purpose. 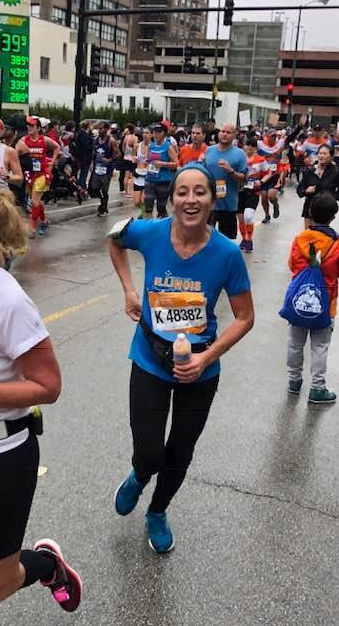 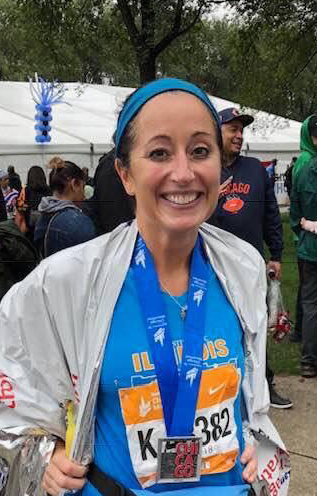 “The National Kidney Foundation improves the health and well-being of people at risk for or affected by kidney disease through prevention, education and empowerment,” she said. “Knowing that I contributed funds that will improve the lives of people with kidney disease was very fulfilling for me.”

When asked if she could offer words of advice to someone interested in starting a running, Hale replied reading on the topic, spending money on good running shoes, and reaching out to other runners for their advice.

“I’ve combined advice from other runners with what I’ve read to develop my own style,” she began. “While I ran the marathon, I had 4 hours and 18 minutes to think about all of the blessings I have in my life. I am motivated in life in general because of the awesome people that I’m surrounded with. Thank you so much to my family, friends, workout buddies and coworkers who have supported me, not only as I trained for this run; however, through all of life’s adventures – especially Parker and Payton Hale who are my inspiration in all I do.”

Editor’s Note: Check out an upcoming issue for a story on another local Chicago Marathon runner.