By: Doug Oleson - Updated: 3 months ago

ROCHELLE — It was the kind of play players dream about making, but rarely happen.

It was early in the fourth quarter of Friday night’s varsity football game between Rochelle and Sycamore. With the game in hand, the Spartans had a fourth down and five when reserve quarterback Caden Carrier tried a quick pass in the flat.

Anticipating the play perfectly, Rochelle senior Ethan Etes stepped in front of the intended receiver to pick it off, and then raced 57 yards untouched toward the goal line for a touchdown.

Unfortunately, it was one of very few bright spots for the Hubs. Playing a highly ranked team on a very bad night, in which wind chills hovered just above freezing due to a relentless, savage wind, the Hubs lost 42-6.

With the win, the Spartans are now 6-1, and are gearing up for a state playoff run. Coming into the game, Joe Ryan’s squad had outscored their opponents 187-33, while winning four straight games in which they out powered their foes 163-20.

Despite the lopsided loss, Kissack said the Hubs (2-5) played better than the score might indicate.

“I thought our kids played well, especially early on,” he said. “We rose to the level of play.” 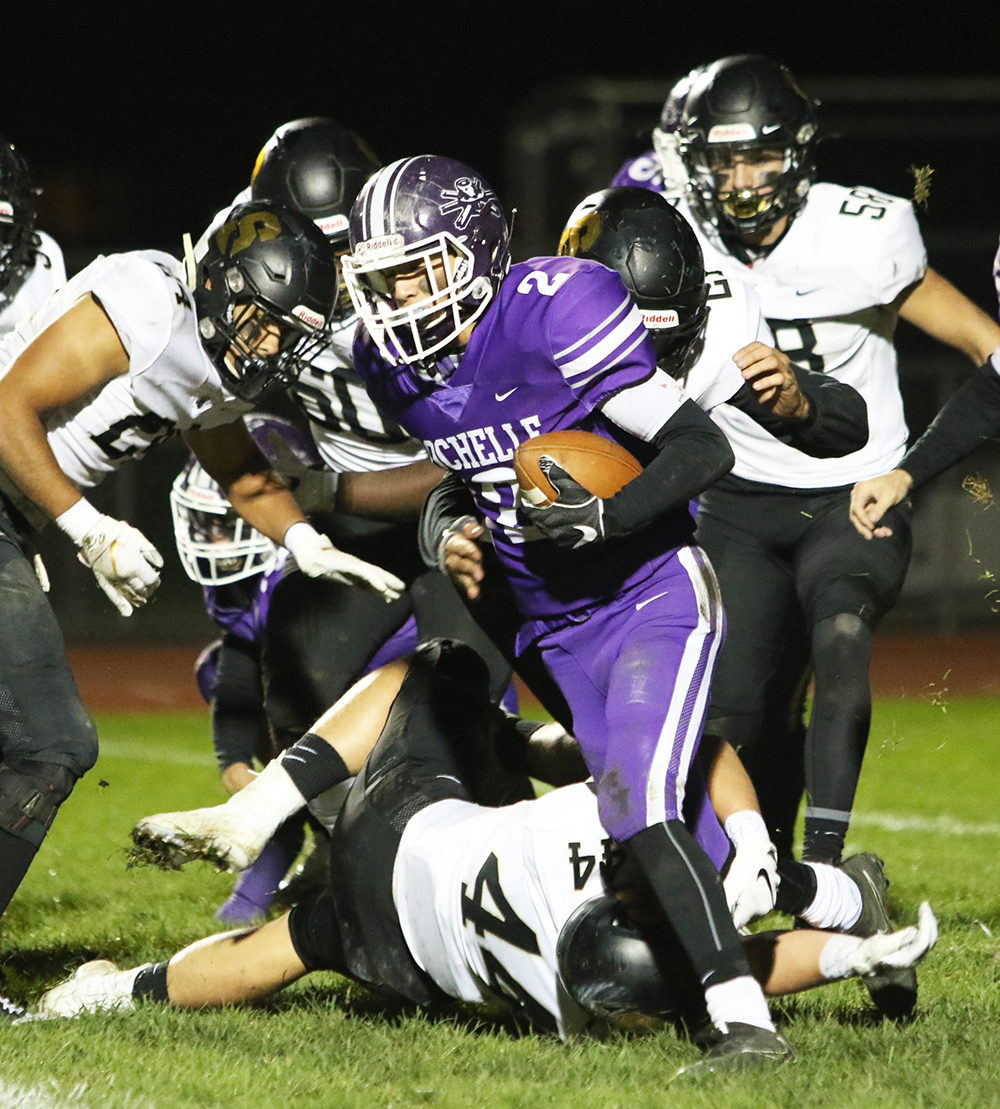 Starting with the opening kickoff, the Spartans scored six of the first seven times they touched the ball. Many of the scores were set up with good field position inside Rochelle’s half of the field.

The first time Sycamore didn’t score, came on their third possession, when the Rochelle defense stuffed a running attempt on fourth and goal.

Getting the ball on their own 5-yard line, the Hubs weren’t able to do much with it, forcing a punt which Sycamore fielded deep in Rochelle territory, leading to the visitor’s third touchdown.

Sycamore senior quarterback Grant McConkey scored the first three touchdowns on runs of six, 45 and 18 yards. He led all rushers with 107 yards rushing on just 10 attempts.

As a team, the Hubs picked up 101 yards rushing on 23 carries, compared to 214 yards on 31 attempts for the visitors.

McConkey, who kicked all six of Sycamore’s extra points, also connected with Manuel Dominquez for a 68-yard touchdown pass late in the first half, three of six passes he completed for a total of 81 yards.

Etes completed one of five passes for Rochelle, including a six-yarder to Briseno.

Gavin Crofoot added Sycamore’s last score when he returned Nolan Morrissette’s punt 45 yards for a touchdown with 4:35 to play in the third quarter.

Rochelle did have a couple of good drives, including one in the first quarter, and their best of the night midway through the third quarter when Ansteth picked up 20 yards and Briseno a dozen, moving the ball from Rochelle’s 45 to Sycamore’s 31. But that was as close as the Hubs could get.

The drive accounted for half of the Hubs’ four first downs. Sycamore, on the other hand, had 11 first downs. The Hubs did lead in time of possession, 25:32 to 22:28.

Kissack said the Hubs will go back to work Monday preparing for their final two games of the season.

The Hubs finish the season by hosting Plano next week and then traveling to Ottawa.

“Both of these final two games are ones we can win,” he said. "These will be games where many of our young players have an opportunity to step up."